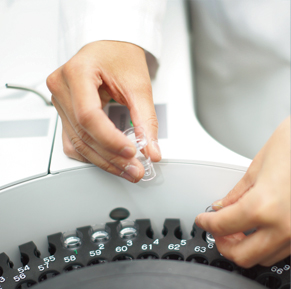 The Forensic DNA Division started DNA identification services in 1991 for the first time in South Korea and has been performing personal identification and confirmation of identity for various incidents and accidents. It obtained accreditation from KOLAS International Accreditation Agency in 2004 for the first time in South Korea and is recently teaching DNA identification techniques through the KOICA ODA project, etc. It has been internationally recognized for solving the Seorae Village Infanticide Case in 2006 and played a leading role in identification of victims of major disasters such as the Daegu Subway Fire, Sinking of the Sewol Ferry, etc.
Additionally, in accordance with the Act on the Protection and Support of Missing Children, etc. in 2005 and the Act on the Use and Protection of DNA Identification Information in 2010, the Forensic DNA Division has built a national DNA identification information database, and DNA quality control service for unresolved murder cases has been newly established as the statute of limitations for murder cases has been removed due to the amendment of the Criminal Procedure Act in 2015.
Furthermore, it carries out species identification and object identification of animals, plants, microorganisms, foods, etc. through DNA analysis and supports investigative agencies through “emergency analysis” for major violent cases. 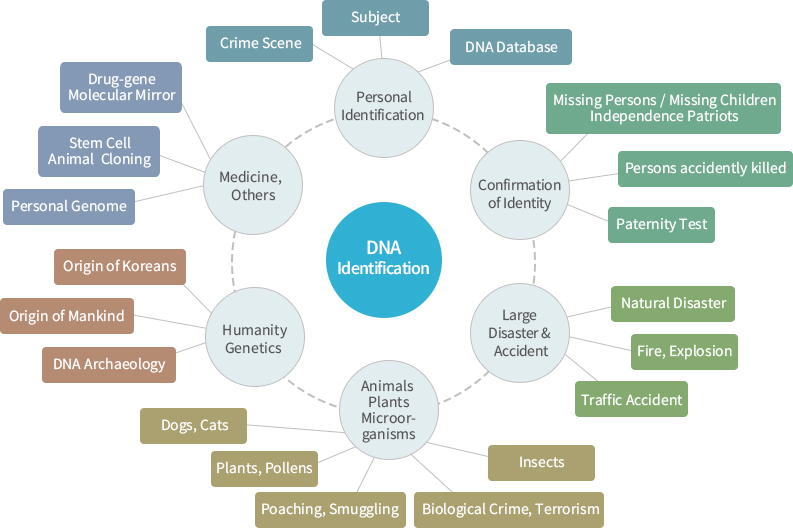 Role of DNA identification (between the investigative agency and court)

DNA profiling is carried out in trace amounts of evidence collected at the crime scene. In particular, the evidence collected at a theft site often contains trace amounts of contact evidence that is less visible than normal bloodstains or semen. After obtaining the DNA type from such a small amount of contact evidence, the laboratory detects the DNA type of the criminal and helps the police solve the case. 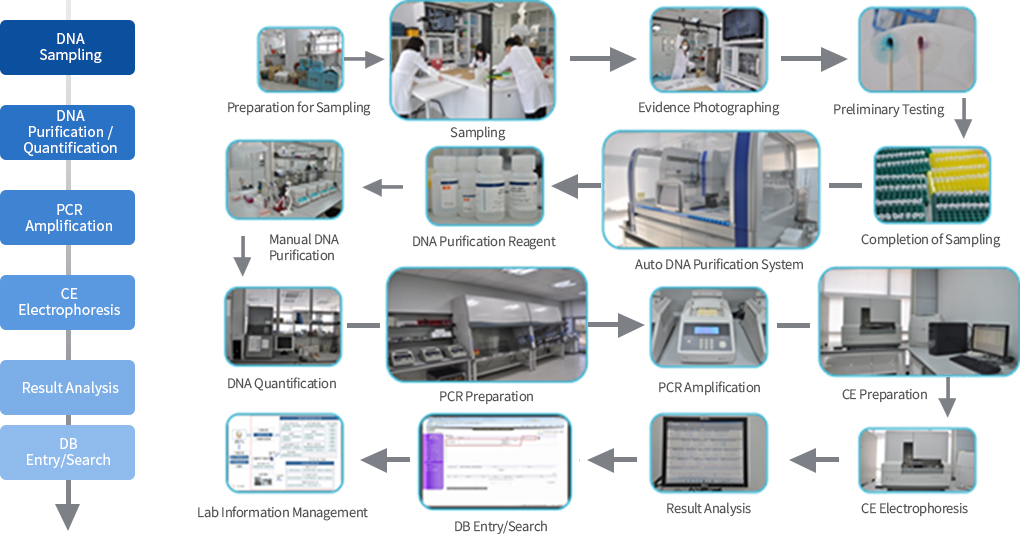 The Emergency Precise Analysis Lab conducts DNA profiling and research on evidence related to urgent violent cases, accidents and criminal investigations as well as precise analysis on evidence in unsolved cold cases. Additionally, it provides urgent analysis services on the evidence of violent cases (murder, rape, robbery, traffic accidents, etc.) for local institutes. The laboratory makes great contribution in criminal investigations and solving incidents and accidents with faster and accurate DNA analysis and profiling in close cooperation with the police.

The Arrested Suspect Analysis Lab compares the DNA database for unsolved cases through DNA analysis on the samples of suspects arrested for 11 major crimes (murder, rape, juvenile sexual assault, robbery, arson, abduction, habitual violence, organized violence, narcotics, special theft, murder of a ranked soldier under military criminal law, etc.) in accordance with the 『Act on Use and Protection of DNA Identification Information』 enacted on July 26, 2010. The DNA database for unsolved cases is built with DNA data isolated from the evidence of numerous rape, theft, and murder scenes.
For personal information protection, the requesting agency encodes the personal information and assigns an identification code to the arrested suspect sample. The DNA analysis result for the arrested suspect is stored in the arrested suspect database with the identification code, and the remaining sample and DNA are immediately disposed. 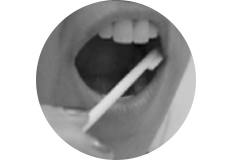 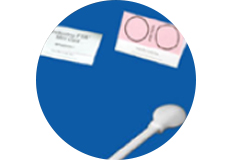 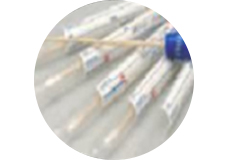 The Search Target Analysis Lab performs DNA profiling and research of a search target requested by the police with regard to the crime scene DNA identification information. 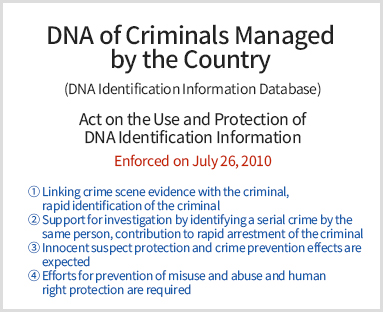 The DNA Quality Control Lab performs quality control and research on DNA as well as manage remaining amounts of DNA used for current or past testing. Additionally, it operates the DNA identification database that rules out and performs DNA information analysis and research for the purpose of criminal investigation. 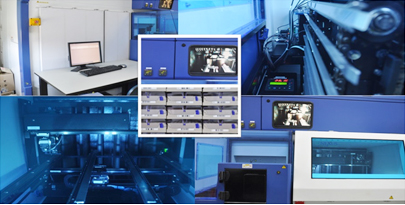 The Missing Child Analysis Lab caries out family identification through DNA search of missing children and their guardians by linking services with the "Missing Child Specialist Institution“ commissioned by the Ministry of Health and Welfare in accordance with the 「Act on the Protection and Support of Missing Children, etc. 」. * In accordance with the 「Welfare of Older Persons Act」 amended in 2012, the laboratory conducts a DNA-based Dementia Elderly Finding Project for missing elderly with dementia by linking services with the "Central Dementia Center" commissioned by the Ministry of Health and Welfare. It also carries out confirmation of the descendants of independence patriots requested by the 「DNA Analysis Project for Descendants of Independence Patriots, etc.」 and family identification through genetic testing of missing persons and their caregivers (bereaved family). 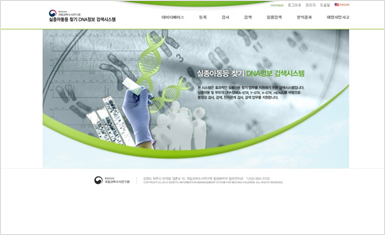 The Forensic Biology Lab performs analysis throughout forensic biology including species identification of non-human samples such as microorganisms, plants and animals and serological analysis on blood, bloodstains, tissues, etc.

The Jeju Smart Lab supports advanced security services of the police by the faster processing of DNA profiling for major emergency cases occurring in the Jeju area (search for the suspects of violent cases such as murder, robbery, violence, traffic accidents, etc. as well as sexual offenses) and establishment of an immediate response system to crime scenes. 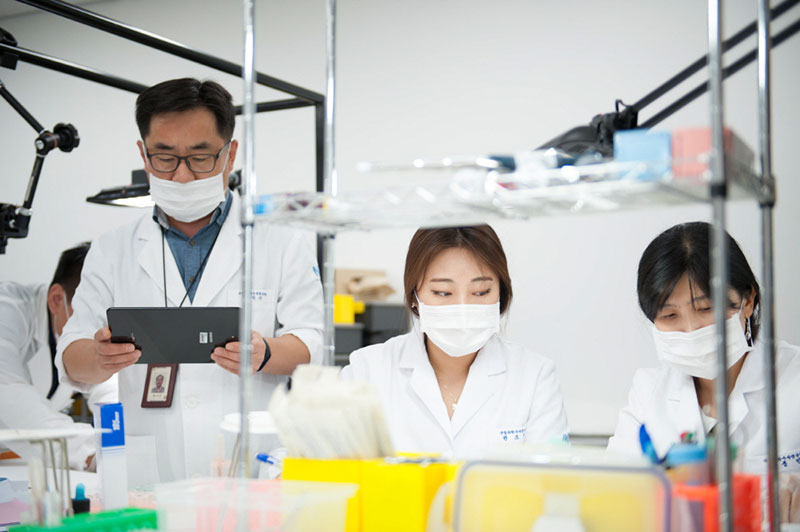 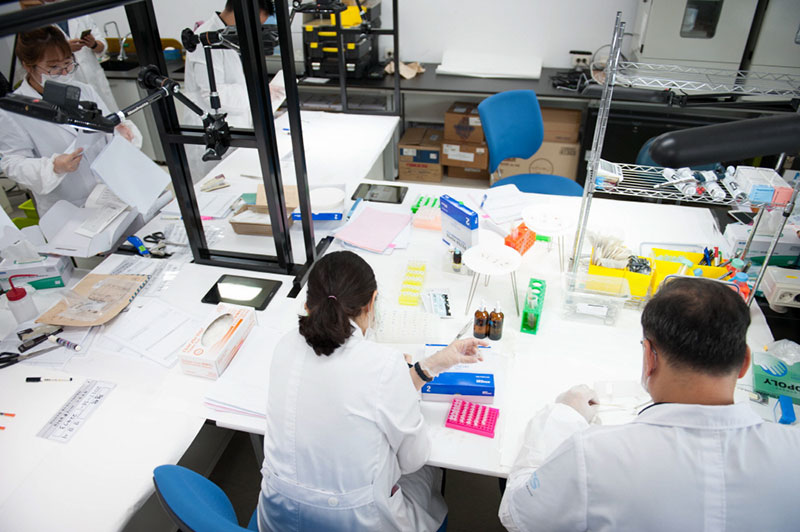 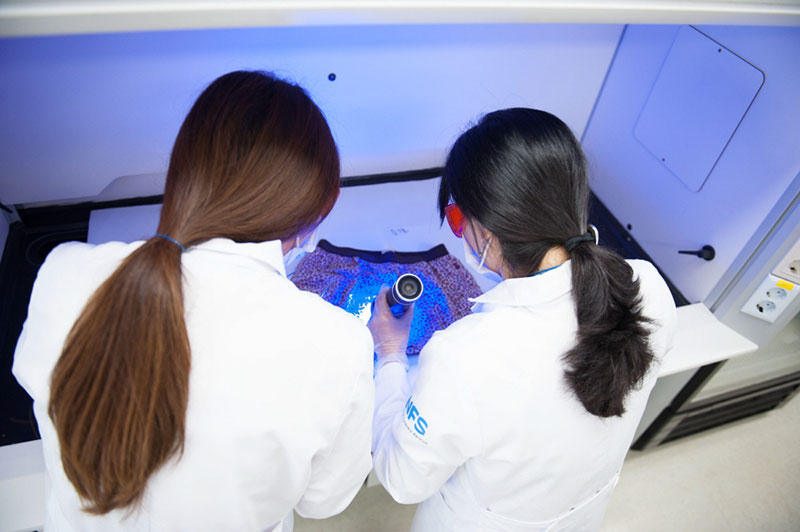 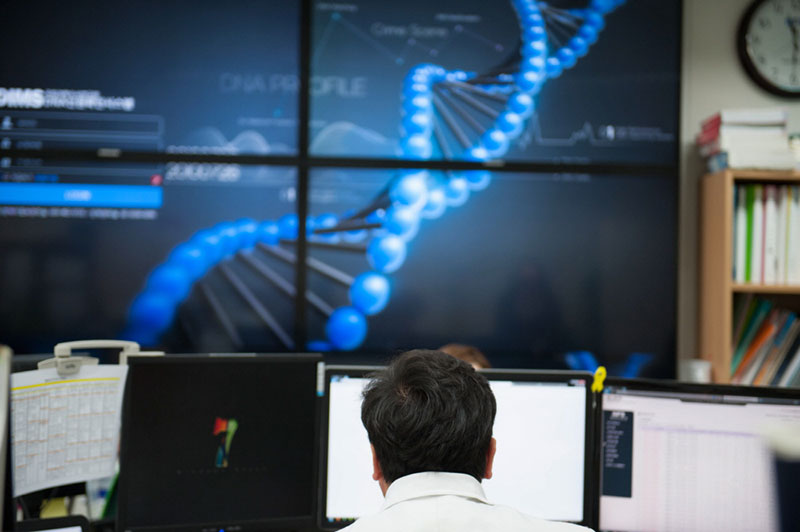 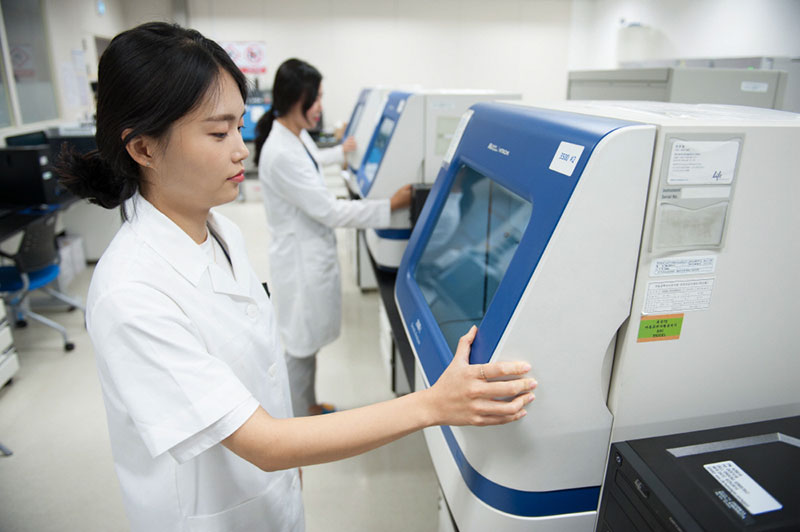 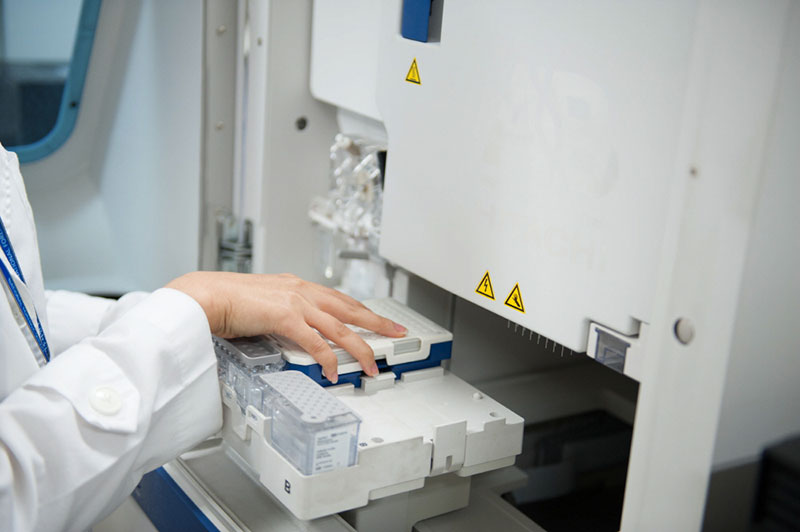 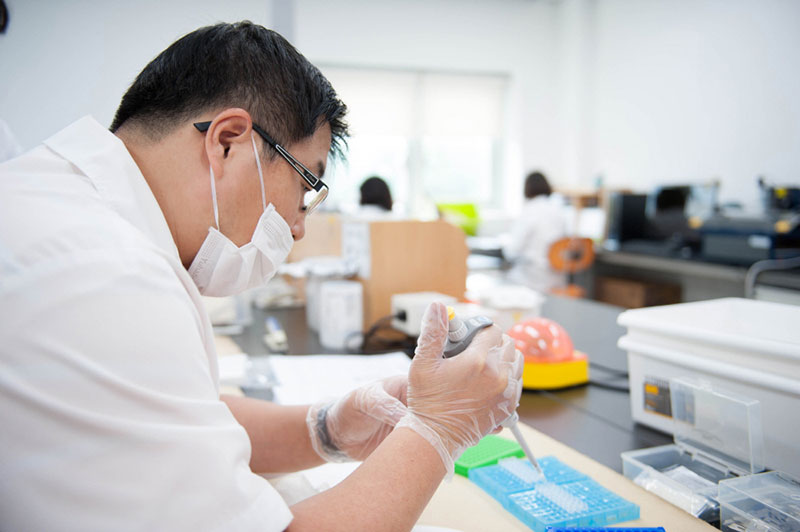 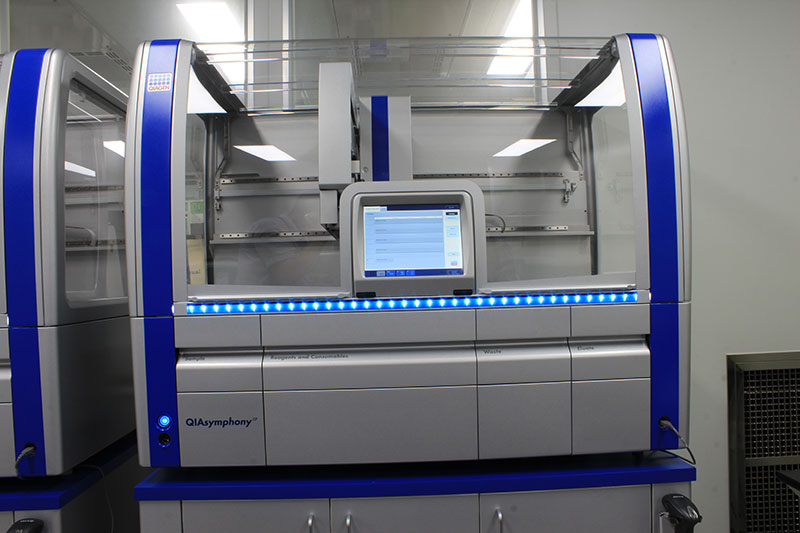 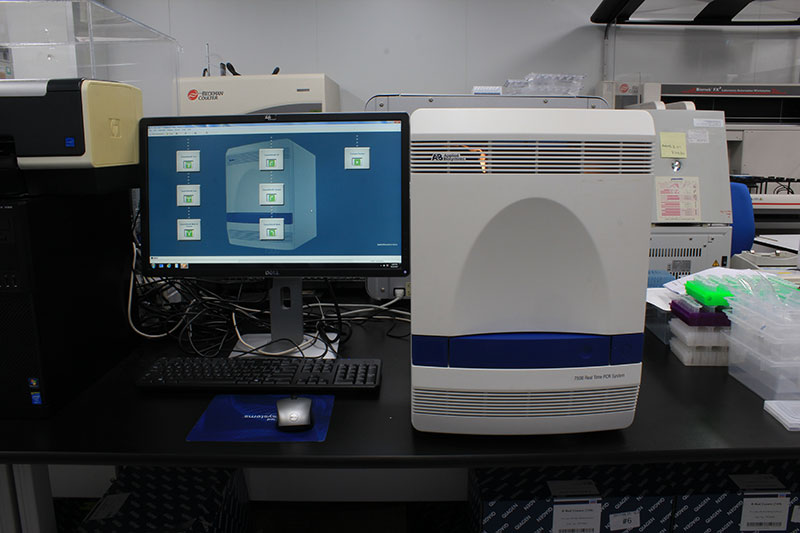 Product Name : AB7500(Life technologies)
Used for DNA quantification during DNA analysis. The amounts of total DNA and male DNA and the degree of DNA degradation can be checked by using the quantitative kit provided by the company. 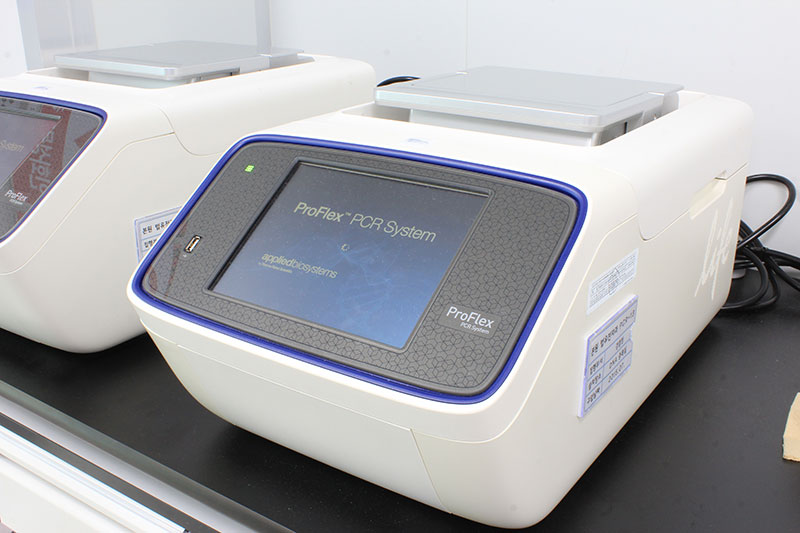 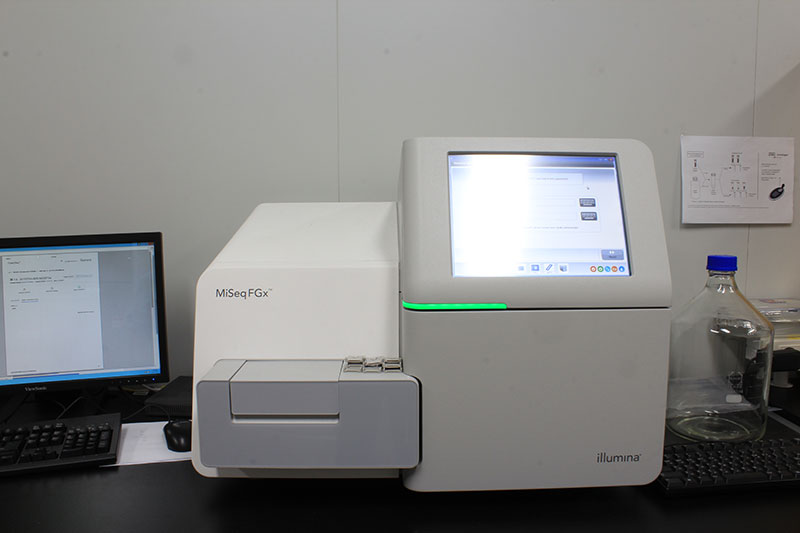 Product Name : Miseq(illumina)
Automatic next generation sequencing system that replaces Sanger sequencing using the existing chain terminator. It can analyze a large amount of nucleotide sequences in a short period of time using a reversible terminator. 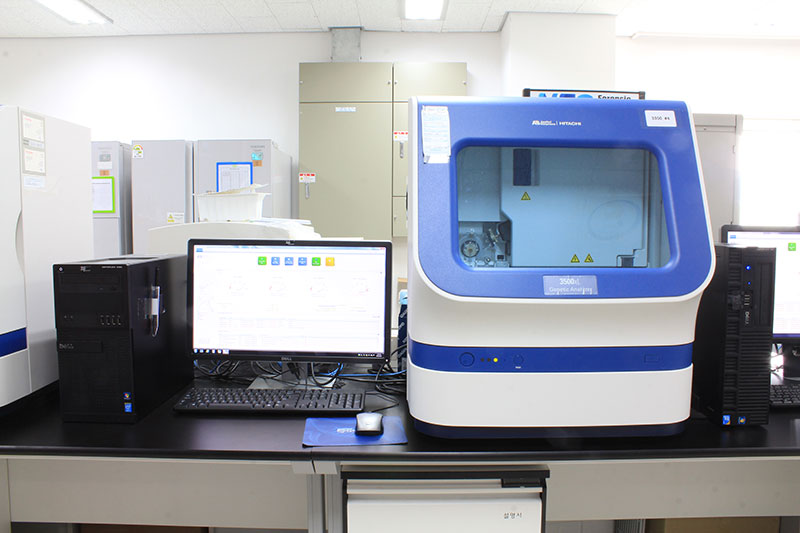 Product Name : 3500XL(Life Technologies)
Automatic capillary electrophoresis system used for securing the DNA profile at the end of DNA analysis. It is operated with 24 channels, thereby having high output, and it is easy to use because consumables are available as a kit. 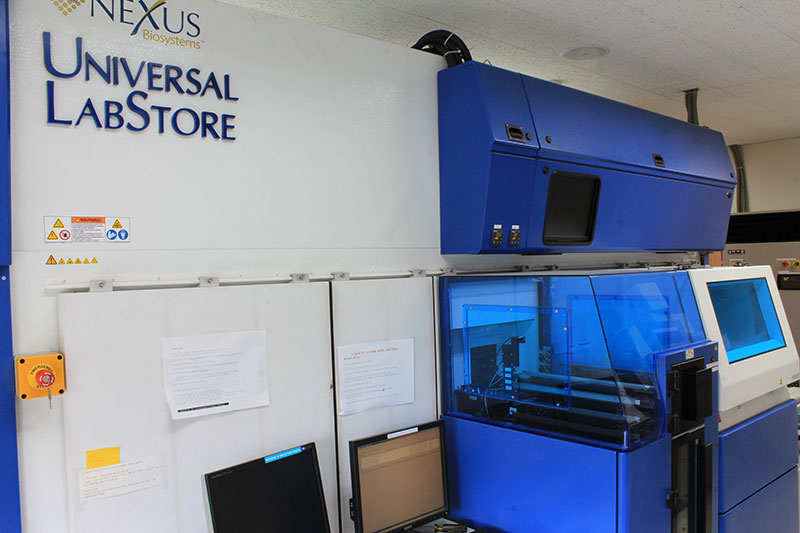